You are here: Home / SSC / How SSC Will Calculate Marks

Here’s How SSC Will Calculate Your Marks Now

SSC has decided to normalize scores of candidates for examinations which are conducted over multiple shifts.

How SSC Will Calculate Marks: Staff Selection Commission (SSC), today, announced that  it will normalize scores of candidates for examinations which are conducted over multiple shifts. The decision to normalize scores is to take into account the variation in the difficulty levels of the question papers across different shifts. SSC has shifted to computer-based mode for various recruitment exams such as SSC CHSL, SSC CGL, SSC GD etc. These exams are held in more than one sessions across multiple shifts.

The process of normalization is followed by several other exam conducting authorities like NTA for exams that are held over multiple shifts to ensure fairness and equity in comparison of candidate’s performances.

In an official release SSC says, “The normalization is done based on the fundamental assumption that “in all multi-shift examinations, the distribution of abilities of candidates is the same across all the shifts”. This assumption is justified since the number of candidates appearing in multiple shifts in the examinations conducted by the Commission is large and the procedure for allocation of examination shift to candidates is random.”

The Normalization will be done as per the formula given below: 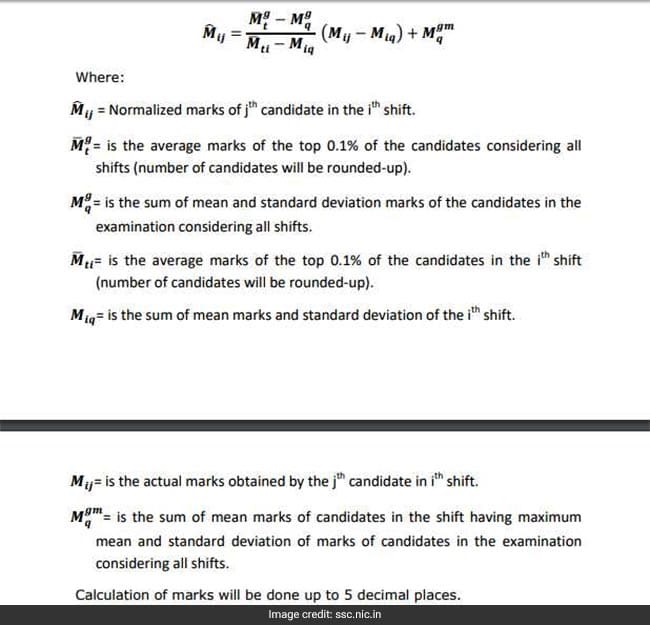 The normalized score is expected to be implemented for all upcoming exams conducted by SSC.